I strive to embody these traits.  I want my daughters to embrace them, too.  I want the heads of our churches, and governments and businesses to lead through examples described by these words.  The world would, no doubt, be a better place if we all placed our priorities on the shoulders of these words.  I look up to those who demonstrate even just a few of these in their daily lives and interactions.  But these adjectives describe figures of dedication and courage, those who have suffered and sought and fought and failed before getting up again to continue to grow more profound.

A dandelion is all of these things effortlessly.  To be a dandelion, as far as I can tell, means that you are strong, persistent, brave, independent (but not isolated...no.  No, usually you come in huge honking clumps of at least five).  Dandelions are influential and even bright.  Like really bright.  Like you can see them from 500 yards away bright.  At night.

I have mixed feelings about dandelions.

As I was contemplating them this weekend (extricating them, cursing them, tossing them) it occurred to me all the fantastic words I could use to describe them.  And how these words are typically considered positive. But, when we want to loathe something, do away with it, assign it as other, we seamlessly turn these traits on their head and make them negative.

Those damn dandelions won't quit.  It's nearly impossible to dig them up completely because their roots are so deep.  And even if you do, they only come back again the next season, even stronger than before!  If you don't catch them in time they burst into a million tiny soft torches that fly through the wind landing wherever and without prejudice.  They are blasphemous bright yellow beacons that flood the yard and lure me outside. 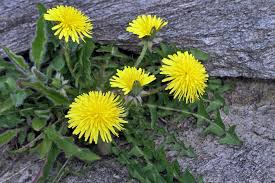 Oddly enough, I wrote another post about dandelions nearly one year ago.  You can read it here.

Kristin
Kristin has two eyes. Get it? I have two "I's" in my name. And two eyes in my face. Like you, I see it all: the good, the bad, the ugly. My goal is to write about all of it, but find a way to the really good even when it's really ugly. Plus, you're not a writer if you don't write.